Donate to the CureCoin Project

Our nonprofit division, the “CureCoin Project” has donated over $41,300 to charities (including our Folding Office). Now you can support/donate our CureCoin Project system using tax deductible contributions – 90% of donations will directly support Curecoin Blockchain Development, Curecoin Rewarded Giving charity and computational power towards Protein Folding Research on [email protected] to help scientists study diseases like Cancer, Alzheimer’s, Parkinson’s, HIV and other very serious genetic, viral and bacterial diseases. Additionally, thanks to blockchain technology, the resulting CureCoin and FoldingCoin tokens, exchange symbols [CURE] and [FLDC], will be used to extend the non-profit CureCoin Project Cloud Folding systems in our Denver, Colorado US facility, in addition to current funding of select charities through Visions Made Viable*.

“The CureCoin Project” has fiscal sponsorship from Visions Made Viable, a 501(c)3 nonprofit organization (tax ID number: 26-2214003). Fiscal sponsorship means that The CureCoin Project has legal and tax exempt status under a sponsoring organization which has agreed to offer us nonprofit status for donations administration. Our fiscal sponsor is Visions Made Viable, a 501(c)3 non-profit based in California and committed to helping seed projects launch, and many of which “spin-off” to become independent non-profits.

Donation funds submitted to “CureCoin” will be sent through Visions Made Viable, who manages and oversees our finances according to our budget.
See figure and donation information below.

You can make a tax deductible contribution to support Curecoin Blockchain Development, CureCoin Project’s Charity and Cloud Folding via Credit Card, echeck or check donation via ‘Visions Made Viable’: 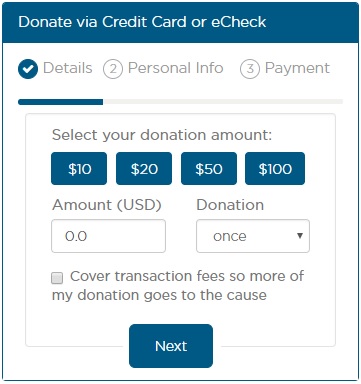 You can make a tax deductible contribution to support the work of CureCoin by sending a check payable to:

‘Visions Made Viable’ or ‘CureCoin ‘ and Sent To:

(please add Attn: CureCoin in the notes section of your check)

Just select “Visions Made Viable” in Amazon Smile, and VMV will ensure 100% of Amazon’s donation will go exclusively to support the Curecoin Project!!!

*CureCoin digital currency produced via The CureCoin Project’s private Cloud Folding systems will either be converted and re-invested into the Cloud Folding systems, which subsequently donate funds to our sponsored charities through Vision’s Made Viable at The CureCoin Project’s discretion. A quarterly report will be furnished to show how much was received, how many [email protected] computational points (PPD) were generated by the project, and how much was donated to our selected charities. Merged Folding will be utilized to maximize computational output and maximize donations for our selected charities through Visions Made Viable. 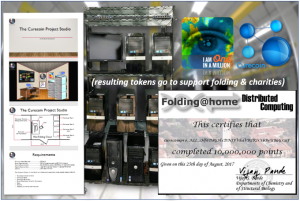 Now, even part-time or casual folders can increase their small computer’s impact on research! No token wallet required…

You can always switch to fold on behalf of the Curecoin Project (part time or full time). The cumulative effect of small contributions can have a HUGE impact on research by folding for our nonprofit Project. Collectively, even low-power casual [email protected] participants can generate LOTS of tokens to support upgrades to our more powerful charity cloud equipment AND to fund charities. This helps maintain market stability for the tokens, and reduces the impact of “folding silos” by letting everyone participate in Curecoin – whether for profit, or charity. 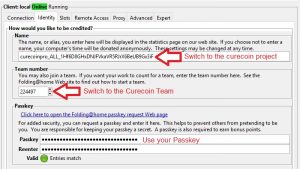 The non-profit CureCoin Project Private Cloud Folding rack is ready to contribute to research with the help of your generous donations. The CureCoin LLC public for-profit Cloud Folding store is ready to let your earn CURE at curecoin.net/shop for those who want to commission convenient cloud folding to help generate their own CureCoins without the need to purchase expensive equipment.

Contributions to The CureCoin Project are tax deductible to the extent allowed by law and its fiscal sponsor, Visions Made Viable, provided no goods or services for your contribution.”

Donate CureCoin to the Folding @ Home project and help us support Washington University St. Louis and Pande Labs at Stanford.

See what donations will be used for at WUSTL’s (formerly Stanford) website.
373 CURE
BAxZtUJfAR7YpsSc1K5R24NhwaAJnc7sab (use this address)

Learn about our past charity contributions and total amounts for each organization.

Donate CURE to the CureCoin Project Charity and Folding Office.