There seems to be a lack of information on how to get folding at home running efficiently and quickly, as well as a general lack of pictures. So here are both! 🙂

What is folding at home?
Folding at home is a project, set up by Stanford, which allows people to use their idle computing power on both classic processors (CPUs) and Graphics Cards (GPUs). This computing power is used to fold proteins, a process which gives medical and biological researchers more insight into how proteins fold to their usable state, as well as why they 'unfold', leading to a greater understanding of protein structure, how they work in our body, and, most importantly, how to fix what went wrong, from curing Cancer to Huntington's to Parkinsons. If you want a more clear understanding of the actual science behind the folding at home project, tons of great info is available on their site: http://folding.stanford.edu/ . For a quick intro video: http://www.youtube.com/watch?v=7sJx9z1uB9k.

This guide focuses on the tech aspects of F@H, and will help you to get your computer(s) folding proteins, and earning you money.

Step 1: Hardware Check
The better your hardware, the faster you can, of course, mine/fold. Many crypto-currency users already have mining rigs, most of which have very powerful GPUs.

While you could fold with low-end hardware, the heat it produces, mixed with the energy it requires, may make it not worth the effort, or may be your excuse to buy that new GPU you've been eying. For benchmarks, we will be assuming we are using Core 17, which we will cover in detail later. I will create another thread where we can work on pooling benchmarks, however here is a quick view of some of the most popular hardware.

Important Note About Cores:
For optimal performance, your miner should have a core on the CPU for each GPU on your system. If you have three 7970s on one machine, that Sempron 145 will be a bottleneck. For scrypt-mining, I built my rigs with single-core CPUs and 2 7950s each, as well as some rigs with some 7970s jammed into them. One rig with a Sempron 145 Sargas + 2x7970 has times when the CPU usage zooms up to 100%, and the GPUs stop running for 10-20 seconds. It appears that some task that must be completed on the CPU is reached by one of the GPUs, so the machine spends 100% CPU time working on that CPU-specific piece of the folding puzzle. While this is going, both GPUs are starved of the necessary CPU time, and so they go idle. However, in one machine with a 2x7950 and a FX-8350, I can get great performance. It seems that 1/4 of the time (on average) is high-CPU time, so having a core for each GPU and an extra core for running high-CPU-time tasks should eliminate bottlenecking. 3 GPU systems should have a quad-core processor. 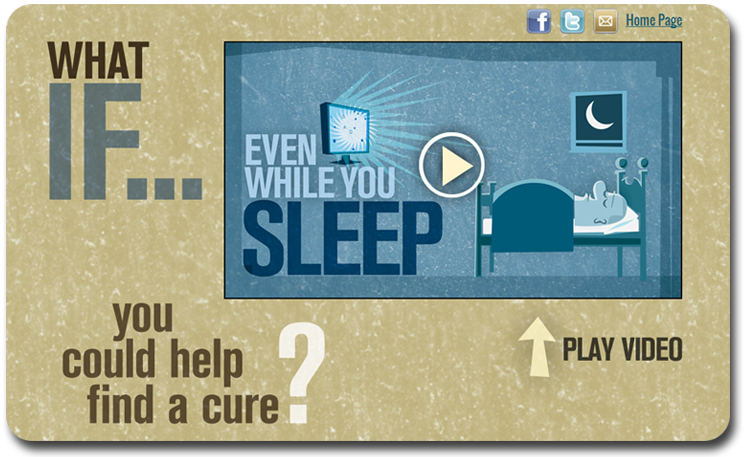 Scroll down to the button 'Start Folding': 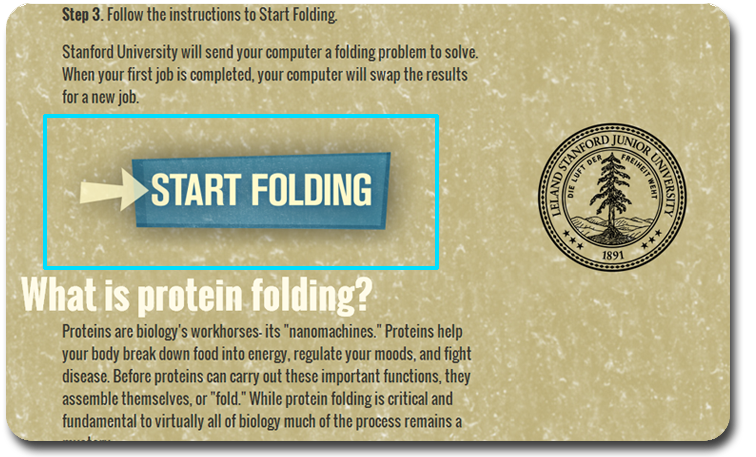 Step through the installer, leaving everything as default until the end, where you uncheck to 'Start Folding At Home'.

Once the program is installed, you will have a short-cut on your desktop, which starts the Folding At Home program. We need to make a slight change before we launch it.

Right-click on the desktop icon, and click on 'Properties'. 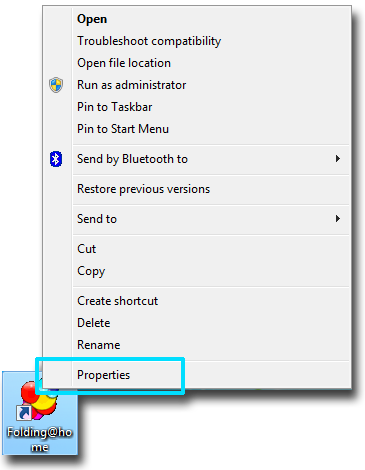 The Properties window will come up. We need to change the launch arguments to include:
--client-type=advanced

This allows the client to use the bleeding-edge core_17 core, which is significantly (by a factor of 2x to 10x) faster than the core13-16 mixes, as well as being the core used for all benchmarks above. 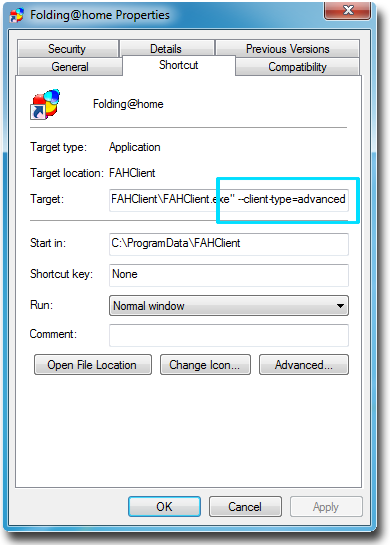 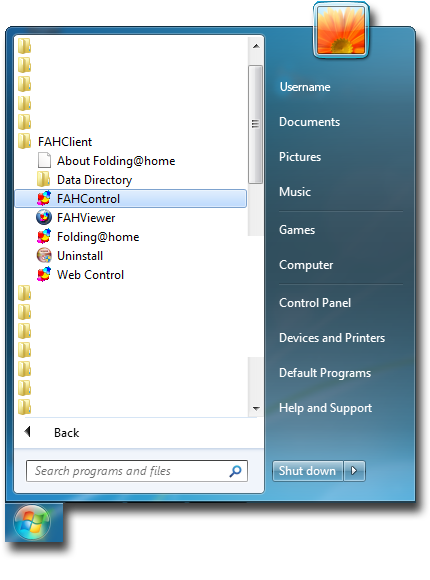 You will be asked about folding anonymously, click on "Configure Identity". 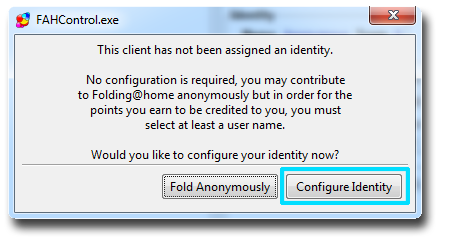 This will bring up a window. 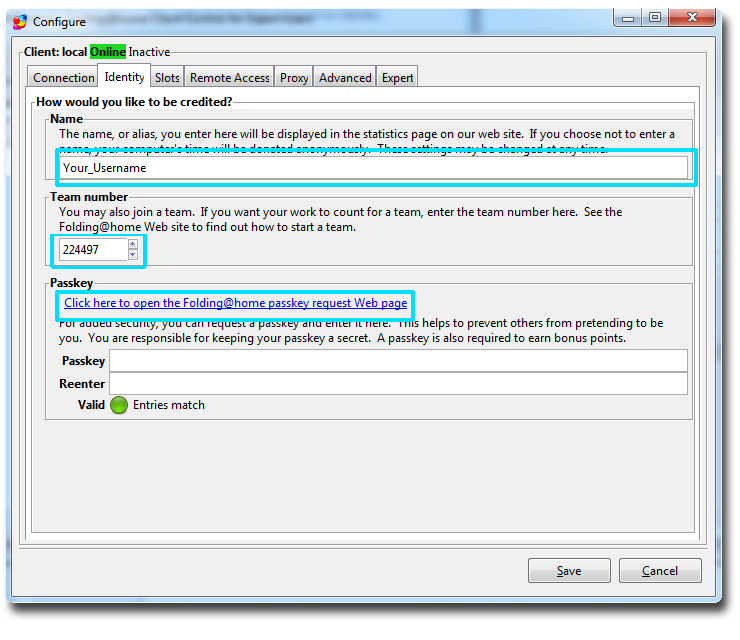 Enter your desired username, "224497" for the TeamID, and then click on the blue "Click here to open the [email protected] passkey request..." link. This will bring up a window: 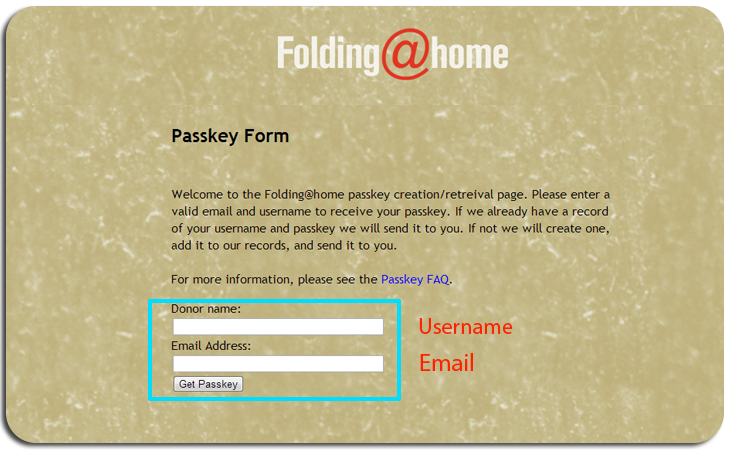 Enter the username you put in the previous window, along with a valid email address that you have access to. You will, soon after, receive a passkey via email. Enter that into the 'passkey' entry on the FAH Client window, and enter it again into the 'confirm' box.

Now, you can finally start folding. The machine *should* automatically detect all GPUs and CPUs. If your system has a small amount of cores (1-2), you may want to right-click on the CPU, and click 'pause': 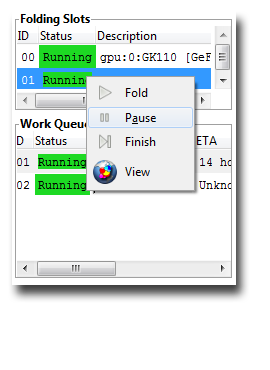 Note: this will make your CPU stop folding. This is done to conserve CPU power to feed your GPUs on systems with very weak  processors.

Now, you need to sign-up for the pool, in order to be rewarded in GLC (Global Coins).

Go to: http://cryptobullionpools.com     in a web browser, and sign up for an account there, using the same username as you input into the F@H client.

Confirming You Are Running Core_17:
To make sure that your GPUs are using Core_17, take a look at: 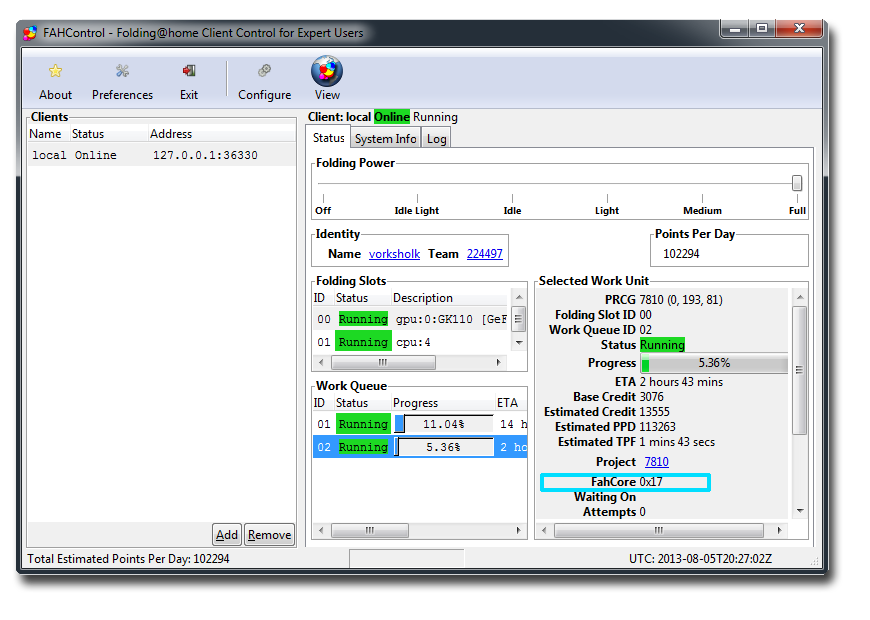 and make sure that you are clicked on the job(s) that are running on GPUs. The ones on CPUs will say something along the line of "Core: 0xa3". 0x## means a GPU-type Job.

Some jobs take as little as an hour and a half to complete on competent hardware, while some take 8+ hours. From my understanding, CryptoBullion's pool pays out, currently, 8000GLC per day total, divided proportionally among all of the miners. The picture above shows a 780 running, with a good overclock.

Oh, he got a domain: http://cryptobullionpools.com/

the folding page on cryptobullion isnt there anymore...

Perfect guide! One of the best among the cryptocurrency community, hopefully this will keep attracting lots of folders/miners 🙂
I have been happily folding for over 5 years now, but have witnessed a decline in overall folding performance. Some say the financial crisis has urged people to reduce power consumption, but if you look at the cryptocurrency hype lately I beg to differ. This is exactly what [email protected] needs to regain attention!

Did you make sure you added --client-type=advanced in the arguments?

i would join if i didn't have to switch teams. but my team mates will really give me grief if i switch teams for money. good idea though.

CygnusXI
(@cygnusxi)
Reputable Member Customer
"jimerickson" wrote:
i would join if i didn't have to switch teams. but my team mates will really give me grief if i switch teams for money. good idea though.

Tried that and it didnt work

Still freezes and crashes the PC as well... Its gotta be drivers for this.

jimerickson
(@jimerickson)
New Member Customer
"CygnusXI" wrote:
"jimerickson" wrote:
i would join if i didn't have to switch teams. but my team mates will really give me grief if i switch teams for money. good idea though.

what can we get from it？

I'm new to the FaH project, and yesterday I did all the steps pointed in these great tutorial, and I even let the application running all night yesterday 🙂

I did subscribe for the  http://cryptobullionpools.com  website, but I forgot my password to get in. I sent the form to retrieve my password and the web page answered me that they would send me an email with a new temp password, but since yesterday I haven't had it yet. I wanna know if that would be an issue to get my points from last night taking into account.

Thanks in advance for all your help 🙂

:I I wish I could figure out how to force F@H to use core 0x17. My GTX 770 is only chugging away at 23k PPD on 0x15. I've tried reinstalling it with no luck. Maybe it just has to finish that work unit before it can switch.

1) How long does it take to start getting coins w/ cryptobullionpools.com I signed up with bitshirehashaway instead of BitshireHashaway (what I used for the stanford) - do the caps make a difference?

2) My GPU is the same that powers my laptop - a 765M and it says it is paused waiting for idle - what does that mean?

Ok I did a bit of research. It seems that each work unit is only compatible with certain F@H cores and which one you get is the luck of the draw. It also seems that core 0x17's give bonus points where older cores do not. You can tell if it gives bonus credit by comparing the base credit and estimated credit for a work unit. I'm stuck working on a Project 8018 work unit and it seems that everyone hates those.

Credit is applied only after a full work unit is completed and uploaded to FAH.  A completed WU will typically appear in the stats 1-2 hours after upload.  8 hours of folding may or may not have been enough time to complete the work unit.  Does the log show a completed WU?

7im
(@7im)
New Member Customer
"Kranchan" wrote:
Ok I did a bit of research. It seems that each work unit is only compatible with certain F@H cores and which one you get is the luck of the draw. It also seems that core 0x17's give bonus points where older cores do not. You can tell if it gives bonus credit by comparing the base credit and estimated credit for a work unit. I'm stuck working on a Project 8018 work unit and it seems that everyone hates those.

fahcore_17 work units moved to public status on Nov 7th.  http://folding.stanford.edu/home/changes-in-core17-update-and-move-to-full-fah/ These are now in the mix of all GPU work units.  Using the advanced setting is no longer needed to get core_17 WUs, nor does it provide a preference to receive them.  Advanced only applies for a short time while newer projects are tested.  Hence the mix of core_15s and core_17s we now get.

Only 8k of my over 90k folding points since I started have shown up on crypto bullion pools hmm.

Hi, I signed with cryptobullion a week a go, but I can't remember my password. I sent them like 6 auto-emails asking for a temp password and another direct email to support, and nothing yet. Someone could help me here, please?

Thanks in advance (I signed there under 'GoldTiger69' user)

Doesn't seem to work for me. I have 81520 points but http://cryptobullionpools.com site shows 0 poins. It has been all week this way.
What am I doing wrong?

My points aren't showing up on CryptoBullionPools either.

Using the Franko altcoin via CryptoBullions until Curecoin becomes a valid altcoin, that I can understand. But is it working at all? I haven't received 1 Frankopenny since many many hours ago.

So by folding you get: GLC (Global Coins). So where do Curecoins come into play? Are they going to replace GlobalCoins as the reward once released? I'm confused.

j_dud3
(@j_dud3)
Eminent Member Customer
"kraken" wrote:
So by folding you get: GLC (Global Coins). So where do Curecoins come into play? Are they going to replace GlobalCoins as the reward once released? I'm confused.

GLC was the reward coin in an early stage of the CureCoin-project.
Currently the reward is set to FrankoCoins via cryptobullionpools.com Which works, but not very accurate.
In the mean time the release of the real deal, altcoin CureCoin, is being finalized. A release-date is yet unknown.

How to fold for CureCoin

How do I start Folding for CureCoin?
How to...?
Troubleshooting your Folding Setup
Can I Calculate or Verify my Points Per Day?
When will I Start to Earn CureCoins?
Video Tutorial for Getting Started Folding
Is there a Folding Pool?
Knowledge Base